OPENING SONG: Shake My Sillies Out by Raffi

IMAGINATION ACTIVITY: Playing in the Snow
I started out by asking, “Is it snowing outside today?”  (It’s not.)  “Well let’s pretend then!”

Let’s make some snow. (wiggle fingers like snow falling)
The snow covers the ground (crouch down and spread snow over the ground)
Brrr!  It’s cold out here! (shiver)
What should we wear when it’s cold out? (hats)
You’re right!  Where do we put our hat? (on our head)
Ok, everybody put on your hats (pretend to put on a hat)
What else do we wear? (continue with jacket, scarf, gloves, boots etc.)
Now that we have our boots on, let’s walk in the snow.
Can you stomp in the snow?
Can you jump in the snow?
Can you make a snow angel?
I think it’s time to go back inside.
Let’s take off our hats (continue with gloves, jackets, boots etc.)
Whew, I’m glad to be back inside where it’s warm!
Now let’s read a book!

BOOK 1: Here Comes Jack Frost by Kazuno Kohara
Stunning blue and white illustrations and a magical story about a little boy who becomes friends with Jack Frost.  There’s mention of a snowball fight in the story, which led nicely into our next rhyme.

FINGERPLAY: Snowflake, Snowflake
We repeated this rhyme a few times.  Everyone enjoyed making pretend snowballs and throwing them at me!

SONG: Snowflakes
(Tune: Row Row Row Your Boat)
Then we quieted down with this rhyme to get ready for the next book.

Snowflakes falling down (wiggle fingers downward)
Falling on the ground
Great, big white flakes (make circles with thumbs and forefingers touching)
That do not make a sound (fingers to lips and shake head no)
Shhhhh!

BOOK 2: Hello Snow by Hope Vestergaardz
I like that this book lends itself to having a discussion with your listeners as you read.  I like to ask a lot of questions and have the children figure out what’s going on by looking at the pictures.  For example, at the beginning a little girl is looking out the window at snow.  On the next page, the text says “Hello pants. Goodbye knees.”  Ask, “What is she doing?  That’s right, she’s putting on pants.  Why does she says ‘goodbye knees’? Because when you put on your pants, they cover your….knees and you can’t see them anymore.  Why do you think she’s putting pants on?  That’s right, to get ready to go outside in the snow!”

SONG: Snow on the Rooftops(mp3) by Kathy Reid-Naiman
from the album Sing the Cold Winter Away

Love this one!  The song is only 44 seconds long, so we did this three times in a row.  The kids kept chanting “Again, again!”  I have a feeling that we could have repeated this one 10 more times before they tired of it.

Snow on the rooftops (Make pointed roof shape with arms.)
Snow on the trees (Hold arms up like tree branches.)
Snow on the green grass (Wave hands over ground like your touching the grass.)
And snow on me! (Point to self.)

Snow on my mittens (Hold up hands like mittens.)
Snow on my nose. (Touch nose.)
Snow on my head. (Touch head.)
And snow on my toes. (Touch toes.)

BOOK 3: Oh! By Kevin Henkes
This is a quiet and lovely book – just like soft, silent snow.  It begins, “The snow falls and falls all night. In the morning everything is white. And everyone wants to play. Oh!”  The dogs, rabbits, squirrels, and children all want to play in the beautiful snow.  This one will make everyone wish for a snow day! SONG/ACTIVITY: Make it Snow Inside!
‘Snowflake, Snowflake’ by Carole Peterson (now Stephens)
from the album H.U.M – Highly Usable Music All Year Long

This is a MUST TRY song and activity.  If you don’t have the CD, Carole’s website Macaroni Soup! for the words which you can sing to the tune of “Twinkle, Twinkle.”

Miss Carole recommends using tulle circles as “snowflakes” to make it snow indoors – and it was a hit!  I purchased a package of 100 tulle circles from Amazon, but they can also be picked up in the wedding section of craft stores.

Before handing them out, we talked about how snow is quiet and moves slowly and gently.  And then I demonstrated how to hold up a circle and keep it in the air by blowing on it.  Then I passed out the circles.  We discussed how they looked and felt, and then I  gave group instructions:

Now let’s try it with the music!

ACTIVITY: Mitten Matching (Printable Mitten Matching from www.elizabethkeating.com)
I was surprised by how much the children enjoyed this activity – they thought it was great fun.

I used this cute Mitten Match Up printable (pdf) from Elizabeth Keating. The mittens were too small for a group to see, so after downloading the pdf, I enlarged it to 250%.  Then I took a snapshot (Edit–> Take Snapshot) of four mittens at a time and pasted the image into word (or publisher, or paint, etc.) before printing.  The images won’t lose their crispness when they are enlarged, so this worked out perfectly!

After completing a few easy matches, I held up two red mittens with different designs on them.  This one was confusing, so we talked about why the mittens didn’t match even though they were both red. 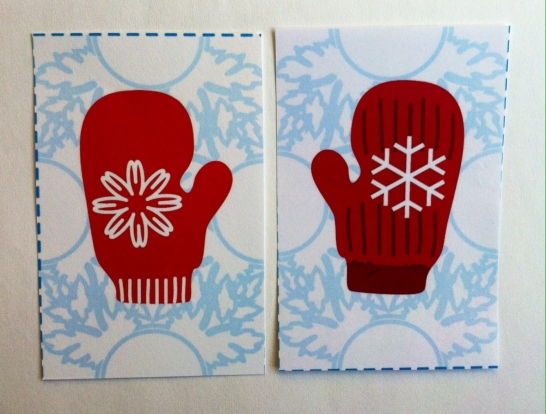 Snow Day by Patricia Lakin
Principals Sam, Pam, Will and Jill (who happen to be exuberant crocodiles) look outside and  see that it’s a snow day.  Even adults like to play in the snow!  Children that are in school and have experienced a snow day will relate most to this book.

I kinda really want these indoor snowballs so that we could have a snowball fight in storytime.  And they come in a pack of 40, so there would be enough for each child to have one.  I’ve actually done this before with scrunched up pieces of paper, but these look so much cooler.  This works well as a “freeze” game in which you play music and when the music stops – everyone has to freeze.  Encourage tossing the snowballs in the air, rolling them on the ground, and gently throwing them while the music is playing.

You could also try making snowballs from tulle by following the tutorial at Piper Loves the Library.

The Story of Snow by Mark Cassino
This is a really nice nonfiction title.