No turkey’s were harmed during the making of this storytime: This week’s storytime turned out to be mostly about turkeys (rather than Thanksgiving.)  I couldn’t bear to read books about hunting or eating turkeys – so here you have a “vegetarian Thanksgiving” storytime.  I particularly like the end of the book Over the River: A Turkey’s Tale, when the turkey family sits down to eat a bountiful Thanksgiving meal of fruits and veggies (and dog biscuits, for the hunting dog whom they befriended.)

OPENING SONG: The More We Get Together 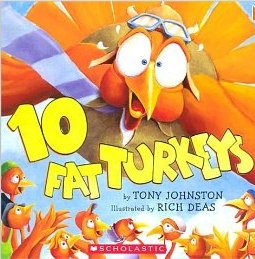 FLANNEL RHYME: Old Tom Turkey
Pattern for this flannel board can be found in Judy Sierra’s Flannel Board Storytelling Book. All you need is a turkey, a duck, and a hill.  Before starting this rhyme have children practice tilting heads from side to side whenever you say “gobble, gobble, gobble” and flapping their arms with “quack, quack, quack.”

ACTION SONG/CD:  Turkey in the Straw by Phil Rosenthal

BOOK 2: Over the River: A Turkey’s Tale by Derek Anderson
A new take on the classic song “Over the River and Through the Woods.”  In this book we meet a turkey family who encounters some trouble on the way to Grandmother’s house.   The entertaining pictures tell the story in this one.  For storytime, I pre-read this by telling the story through the pictures.  Then we go back through and sing “Over the River” along with the book.

CRAFT: Why turkey’s, of course!  Here is my Turkey Pattern and printable Happy Thanksgiving words.  I used die-cut leaves, but they can also be cut out by hand. 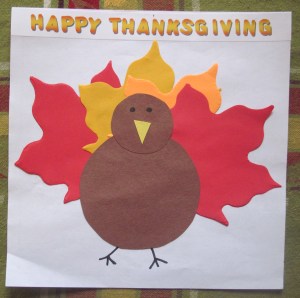 One thought on “Turkey Day”